Faenza is located on the Via Emilia, between the sea and the hills, halfway between Bologna (50 Km) and Rimini (65 Km), at the intersection with the road that connects Ravenna (32 Km) to Florence (100 Km).

Since 1300, Faenza has been an important political and cultural meeting point thanks to the ties that the local lordship of Manfredi was able to establish with Florence under the Medici’s domination. Furthermore, for centuries the city has been embellished with monuments that still retain their charm.

Urban spaces are considered masterpieces as well. There is the imposing Piazza del Popolo, lined by two porticoed wings and overlooked by Palazzo del Podestà and Palazzo Municipale, once inhabited by the Manfredi. Moreover, the city boasts monuments such as Piazza della Libertà with its late fifteenth century Cathedral, which houses many works of art from the Renaissance period and the monumental fountain, whose bronzes date back to the seventeenth century.

Among the other remarkable monuments of the town centre, there is the eighteenth-century Palazzo Milzetti with its interiors decorated with refined neoclassical tempera, the elegant Masini Theatre and the Pinacoteca.

The International Museum of Ceramics (MIC), founded in 1908, houses pieces of every geographical origin and every historical era, with a large section dedicated to Faentine ceramics of the Renaissance. 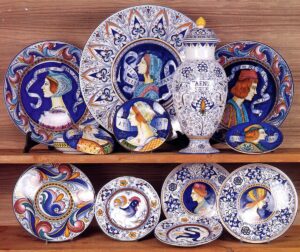 Other art collections of great interest can be admired at the Municipal Pinacoteca, the oldest town museum and the Carlo Zauli Museum. Furthermore, it is worth considering the Civic Museum of Natural Sciences (a visit is possible only by appointment), which is among the most important museums in Romagna for its vast collection of insects, birds and fossils.

When to go and what to see

Faenza is worth a visit all year round, also for the numerous cultural initiatives, events, exhibitions and markets related to ceramics.

Known as an international synonym of ceramics, the ancient artisanal tradition of which dates back to the 12th century, Faenza reached its splendour in the Renaissance period. Indeed, “faiance” is still the name of for majolica in many European languages. Here the art of ceramics has been able to combine the new with the old. Moreover, a lively feeling for art can be found in over sixty ceramic workshops where artisans and artists produce certified branded items, with forms and decorations ranging from historical reproductions to artistic experimentations. Plates, vases, mugs, tureens and albarelli are nowadays considered as refined souvenirs able to embellish every home.

The territory is rich in high quality products such as the PGI Peach of Romagna and Nectarine, apricots and grapes, which are also of organic production. DOC branded wines range from Sangiovese to Trebbiano, from the Pagadebit to the famous sweet Cagnina and the appreciated Albana DOCG both in the dry and passito version. At the table, you can enjoy the traditional hand-made pasta and passatelli in broth. There are also local tastings on the “Strada della Romagna” – “Strada dei Vini e dei Sapori” in the hills of Faenza.

During the summer months, the town centre comes alive with “Summer Tuesdays”, a traditional event during which the numerous commercial and handicraft activities offer an opportunity to be recreated in a great hospitality atmosphere. All this takes place through exhibitions set up along the streets, guided tours of historical buildings and churches, live music and tastings of local food and wine proposed by restaurants and bars.

Suggestive routes inside the town centre and interesting variations outside of it invite you to discover the history and nature of these places. All routes and guided tours are available here.

Faenza celebrates its past in the “Palio del Niballo”, one of the oldest jousting events ever known. In the month of June, the five town districts enliven the city with challenges between flag wavers and drummers, enjoyable food and wine evenings and entertaining shows, until the race of the Palio in which the knights face each other in the medieval joust of Niballo. The race is preceded by an impressive historical parade that evokes the splendour of the Manfredi lordship.

In May, instead, the “Maggio Faentino” takes place. A set of events with a common denominator: good living. Art, culture, food and wine, sport and music join together to promote the reality of Faenza even beyond the territory.

Every two years, during the first weekend of September, Argillà – Italia takes place, one of the major European ceramic festivals.
The exhibition market is also open in the evening and offers visitors the possibility of a pleasant night walk among the stands. Indeed, the exhibitors in Faenza present their best production of artistic and artisan ceramics, ranging from art, sculpture, and design, to furnishing accessories, home and fashion accessories.
There are also numerous side events making up the character of the festival, such as the “Mondial Tornianti” (international lathe’s competition), spectacular overnight cooking in outdoor ovens, ceramic activities for children, workshops, exhibitions and conferences.

Driving along a ring circuit, you would be able to visit all the Municipalities that, in addition to Faenza, are part of the territory “Terre di Faenza”: Riolo Terme (17Km), Casola Valsenio (30Km), Brisighella (13Km), Castel Bolognese (8Km) and Solarolo (11Km). Furthermore, from Faenza it is easy to reach Ravenna (about 30 Km), an ancient Byzantine city which is famous worldwide for its mosaics. It is also full of monuments that UNESCO has declared a World Heritage Site.