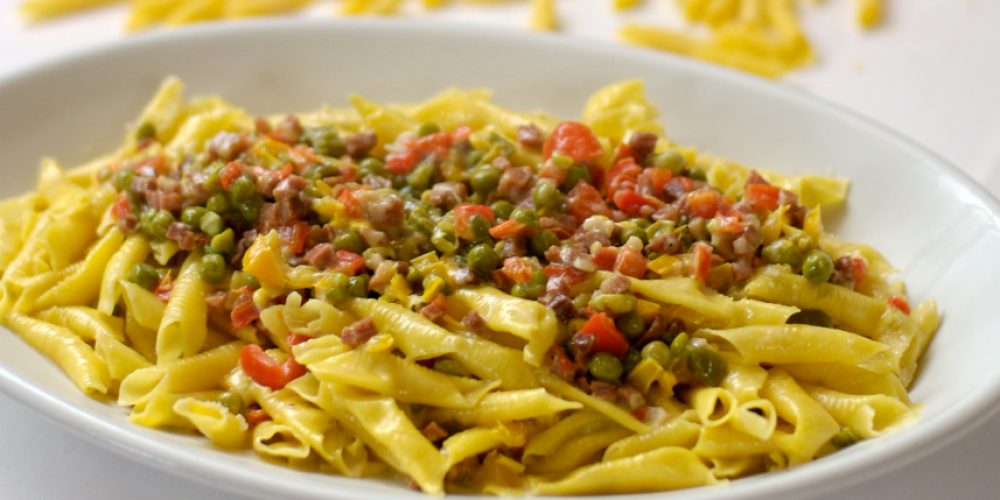 Garganelli is a typical pasta shape of Imola area, prepared with flour, eggs, Parmigiano Reggiano and nutmeg.
After preparing a thin “sfoglia” dough with a rolling pin, cut it into squares with 4 or 5 cm sides.
Place the squares diagonally on the “pettine”, a frame with a series of parallel wires crossing it, then roll them around a small stick of 4mm in diameter.
To make a green variation of the recipe, add to the dough a small quantity of boiled spinach.

Garganelli of Imola used to be cooked and served with broth, today they are typically seasoned with ragout, scalogno or peas.

A lady, working as a cook in a noble home in Imola, precisely home of Cardinal Cornelio Bentivoglio d’Aragona, Pope Ambassador in Romagna in 1725, was busy preparing a meal for a group of guests.

Menu of the day consisted in “caplett”, similar to Bologna tortellini but with a different taste.
After preparing the filling with pork meat and chicken, she put it aside and moved to the pasta dough.
While thinning the dough, she realized one of the house pets had eaten most of the filling.
Despite her discouragement, she managed to find a brilliant solution in order to serve a tasty dish.

In those times in Imola, every house was equipped with every tool fit for spinning a waving hemp. It was easy then, putting together small sticks, similar to pencils in diameter and length, looms and “pettini” (frames with parallel wires crossing it).
The cook in dispair decided to roll the dough squares arounf the stick while pressing on the wires of the frames: in a very short time, the table was full of golden striped cylinders. Garganelli were made.

Once cooked in capon broth, already made for cappelletti, and served in a delicious ragout, every single guest at the table complimented the cook for the novelty of the recipe. There was so much interest in the procedure and the making of Garganelli, that in a short time it was famous all over Imola area.

Later on and today still, Garganelli were served in different ways: not only in broth, but also in the oven, seasoned with sauces, truffle and mushrooms. Parmigiano Reggiano cannot be missing.

This is the true story of Garganelli creation, told for years during the winter evenings spent in the warm stables.