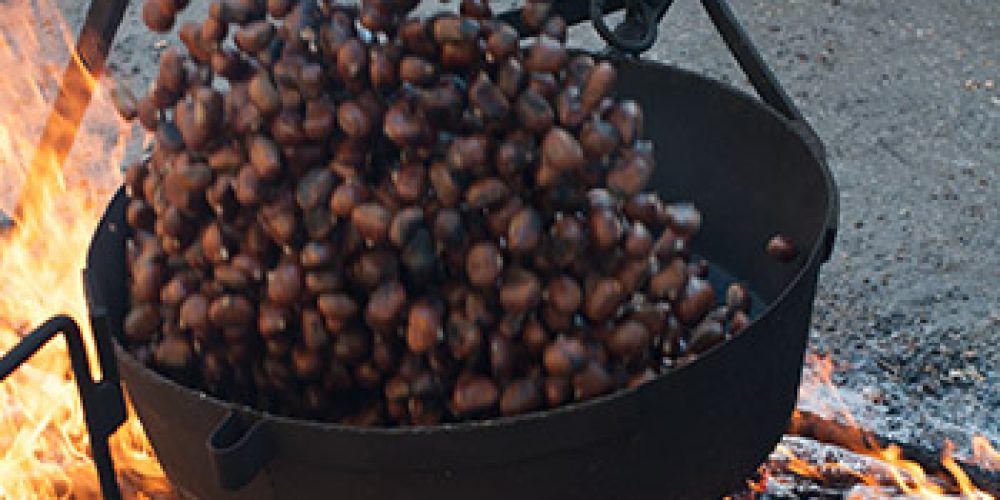 This chestnut differs from the others because of the bigger size of the fruit, the organoleptic qualities and its shape, flat on one side and curved on the other one.
Chestnut of Castel del Rio PGI presents a shiny red-brown skin with darker stripes, while the pulp is lighter in color, crunchy and sweet.
Another difference between Castel del Rio chestnut and other varieties is the thickness of the skin: it is very thin and makes it easy to peel the fruit.

Suitable for PGI mark are chestnut tress growing between 200 and 800 above sea level.
Tree density should be between 75 and 125 per hectar. It is forbidden any kind of fertilisation, making the produce natural and organic.
Maximum production is fixed at 1.5 tons per hectar, while all lavoration processes should take place inside the production territory, with the extension of Imola municipality.
Santerno Valley offer ideal conditions for production: here chestnut trees can live over 400 years.

To enjoy chestnuts of Castel del Rio PGI at their best, it is necessary to cook them on embers (caldarroste), but they can also be boiled, braised or in a puree, also cooked in milk with sugar or Cognac.
In patisserie, Chestnuts are used to prepare the famous marron glacès, base ingredient for traditional desserts such as Montblanc or pies.

Chestnut flour, with the addition of eggs, milk, sugar and anise, is used in the making of fritters, sweet ravioli, tortelli filled with chestnuts and castagnaccio.

Chestnuts tree is originary of Mediterranean area. Its fruits have been an importante element in human nutrition since the Middle Ages. During XVII century, chestnut cultivation was already popular and the selling of the fruits was a strong economical source for Castel del Rio terriotory. In the first half of XIX century, the month of October hosted and important exchange market.
In 1885, cultivation covered over 1450 hectares, which is about 40% of the cultivated lands on Castel del Rio.
In 1939, a Royal Act distinguished Castel del Rio chestnut from other varieties.